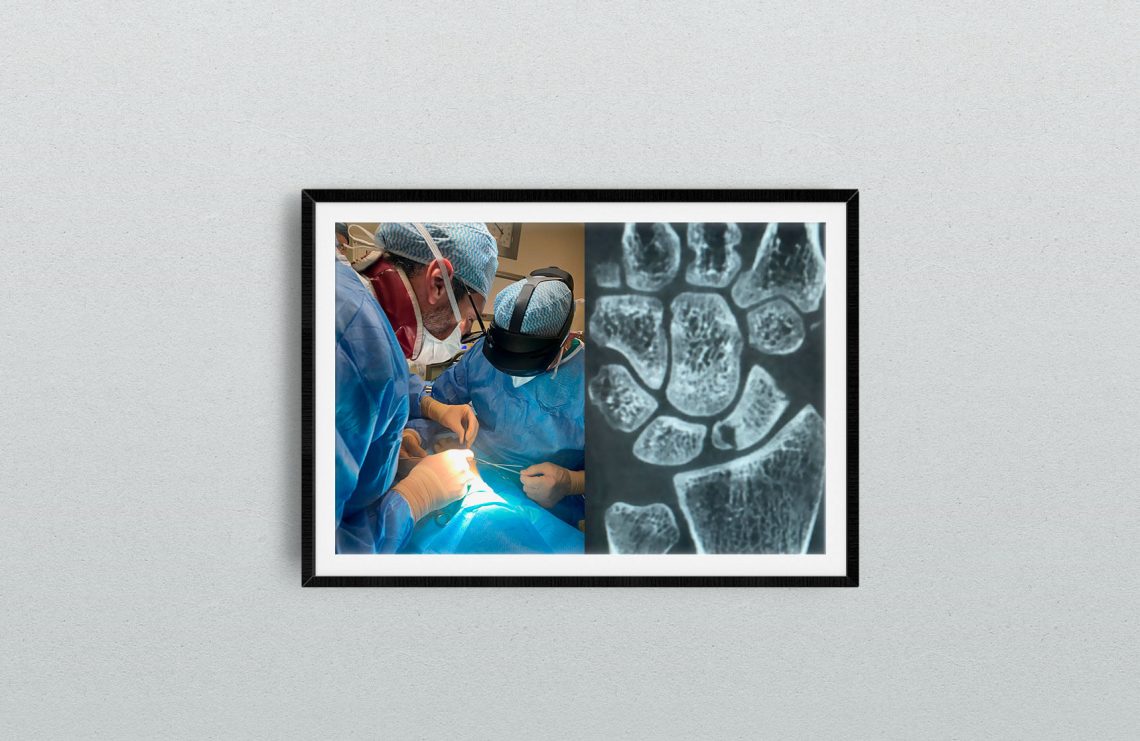 22-year-old male, left wrist. He had a twisted trauma in hyperestension and he didn’t require any treatment. He complained only a slight pain  for two months and then the pain increased and he had an X-ra and then an arthrorm and was indicated as strategy  a volar pedicled vascularized graft  by  Mathoulin in another hospital. MRI showed, as obvious, signs of vascular disturb in the small fragment, still connected to the SL ligament. It’s basically an intraligamentous fracture  according to Garcia Elias. But the CT showed a very small size of the proximal pole.  We explained to the patient that both the volar pedicled vascularized graft by  Mathoulin or even the dorsal  Zaidenberg would alter too much the morphology of the proximal pole and the distal pole, which is still preserved, and that a stable fixation wuold have been difficult.

A free osteocartilaginous graft from  the femoral condile could also be indicated as a last chance.

We think that a mininvasive dorsal approach by interrupting  the distal sclerosis of the nonunion site  with kierschner wires perforations and by carrying out a cancellous  graft from radius,  trying not to break the medial bridge, could produce the conditions of then have a stable fixation with a headless mini-screw, and relying on vascularisation coming from the distal fragment and perhaps from the RSL ligament,  according to Kauer’s studies: practically w aimed to a creeping substitution of the necrotic bone. It’s the stable fixation  the solution for us. And with the addition of a stimulation of local hyperaemia according to the core decompression effect according to Illaramendi. And you don’t cut any bridge for later options like a free graft from femoral condile or a biological tendon spacer, an anchovy as suggested by Garcia Elias or a pirocarbon spacer.

Of course, you could  performe the procedure  with  arthroscopy with the graft harvested from the  radius or the iliac crest, but the fixation through k wires would have been less stable, while performing an arthroscopy fixation  without being able to flex the wrist would not have been biomechanically possible because you have to centre the proximal pole vertex. Only in the open approach  can the vertex  be exposed. And then We think that if you save the ligament insertion onto the dorsal ridge, from which the main vascular supply  comes, even a mini dorsal  approach saves the residual vascular supply, as in artroscopy , but fixation is obviously easier. And from a medico legal point of view the patient is well informed of any possible indication from evidence based literature, with a rate of success of 60-70 %, not more.

Why using Hololens 2 powered by 4Solid in Wrist surgery?

Hololens based on mixed reality is a remote  support to teach how to build and operate large industrial machines, or is used it in the aeronautics to provide instructions as speed and altitude or transmit the anti-collision alarm in real-time to pilots

The hololens has been developed for many industrial uses and to work standing up. In that position, the vision is focused on what you see. So when you use it in shoulder surgery or elbow surgery, it’s fine, and the operating field is large. In the wrist and hand surgery, you work sitting and the field is small , so you have to keep your neck very flexed  to centre the field, so a very uncomfortable position for the first surgeon. This  is why I’m wearing it,  at this stage of development. We’re developing the modifications to the lens to centre the image and to zoom in. We are still working in progress with 4Solid.  While in the knee surgery and hip surgery you work with the scaffold on your  head to avoid infections, so you can’t wear Hololens.